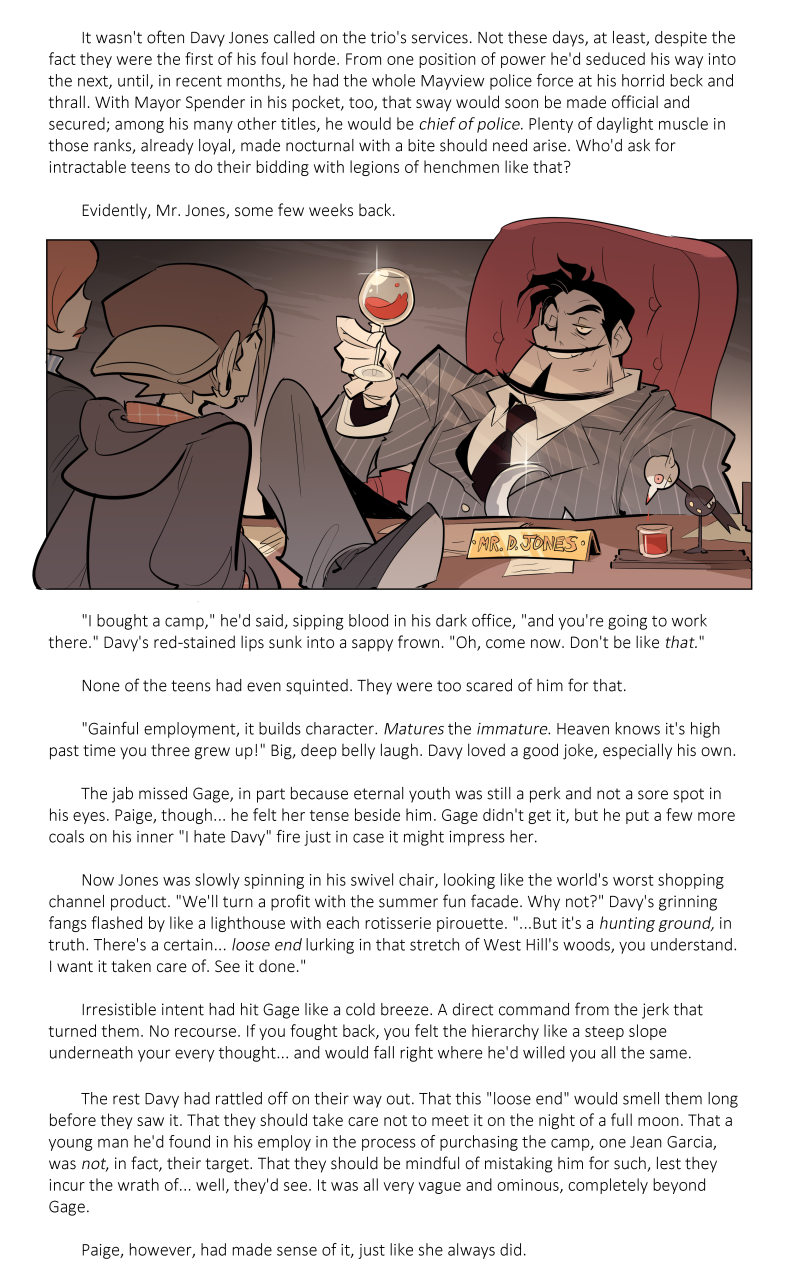 Thanks for reading! Hope your holidays are going well.

It wasn't often Davy Jones called on the trio's services. Not these days, at least, despite the fact they were the first of his foul horde. From one position of power he'd seduced his way into the next, until, in recent months, he had the whole Mayview police force at his horrid beck and thrall. With Mayor Spender in his pocket, too, that sway would soon be made official and secured; among his many other titles, he would be chief of police. Plenty of daylight muscle in those ranks, already loyal, made nocturnal with a bite should need arise. Who'd ask for intractable teens to do their bidding with legions of henchmen like that?

"I bought a camp," he'd said, sipping blood in his dark office, "and you're going to work there." Davy's red-stained lips sunk into a sappy frown. "Oh, come now. Don't be like that."

None of the teens had even squinted. They were too scared of him for that.

"Gainful employment, it builds character. Matures the immature. Heaven knows it's high past time you three grew up!" Big, deep belly laugh. Davy loved a good joke, especially his own.

The jab missed Gage, in part because eternal youth was still a perk and not a sore spot in his eyes. Paige, though... he felt her tense beside him. Gage didn't get it, but he put a few more coals on his inner "I hate Davy" fire just in case it might impress her.

Now Jones was slowly spinning in his swivel chair, looking like the world's worst shopping channel product. "We'll turn a profit with the summer fun facade. Why not?" Davy's grinning fangs flashed by like a lighthouse with each rotisserie pirouette. "...But it's a hunting ground, in truth. There's a certain... loose end lurking in that stretch of West Hill's woods, you understand. I want it taken care of. See it done."

Irresistible intent had hit Gage like a cold breeze. A direct command from the jerk that turned them. No recourse. If you fought back, you felt the hierarchy like a steep slope underneath your every thought... and would fall right where he'd willed you all the same.

The rest Davy had rattled off on their way out. That this "loose end" would smell them long before they saw it. That they should take care not to meet it on the night of a full moon. That a young man he'd found in his employ in the process of purchasing the camp, one Jean Garcia, was not, in fact, their target. That they should be mindful of mistaking him for such, lest they incur the wrath of... well, they'd see. It was all very vague and ominous, completely beyond Gage.

Paige, however, had made sense of it, just like she always did.