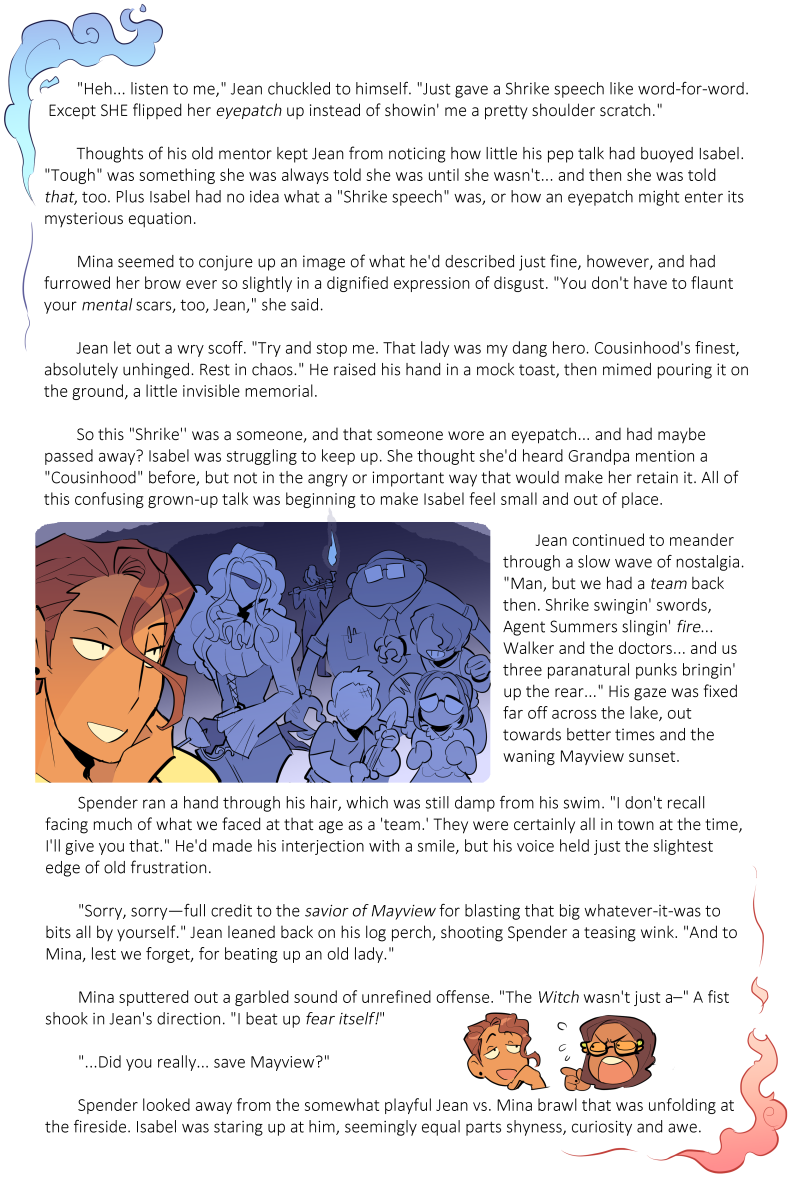 Welcome to... an experiment! After hitting the physical and emotional barrier of wrist injury lockdowns again and again, I started thinking about ways I could keep Paranatural going with the momentum and care it deserves without whittling down my health to the point where I couldn't make it anymore. My old mini golf story doing well turned me on to illustrated prose, so I decided I wanted to try giving it a shot for main updates, with the idea that I'll break back into comic panels when I can and should. I know this is may be a scary change, but I want to try it on and see if it's sustainable. As I said on Twitter, I trust myself to make the story exciting in this format, and if it doesn't work out, I don't mind having an experiment in the archives. I hope you'll reserve full judgment for at least a little while while I stretch my wings a bit.

Now more than ever, thank you for reading!

"Heh... listen to me," Jean chuckled to himself. "Just gave a Shrike speech like word-for-word. Except SHE flipped her eyepatch up instead of showin' me a pretty shoulder scratch."

Thoughts of his old mentor kept Jean from noticing how little his pep talk had buoyed Isabel. "Tough" was something she was always told she was until she wasn't... and then she was told that, too. Plus Isabel had no idea what a "Shrike speech" was, or how an eyepatch might enter its mysterious equation.

Mina seemed to conjure up an image of what he'd described just fine, however, and had furrowed her brow ever so slightly in a deliberately dignified expression of disgust. "You don't have to flaunt your mental scars, too, Jean," she said.

Jean let out a wry scoff. "Try and stop me. That lady was my dang hero. Cousinhood's finest. Absolutely unhinged. Rest in chaos." He raised his hand in a mock toast, then mimed pouring it on the ground, a little invisible memorial.

So this "Shrike'' was a someone, and that someone wore an eyepatch... and had maybe passed away? Isabel was struggling to keep up. She thought she'd heard Grandpa mention a "Cousinhood" before, but not in the angry or important way that would make her retain it. All of this confusing grown-up talk was beginning to make Isabel feel small and out of place.

Jean continued to meander through a slow wave of nostalgia. "Man, but we had a team back then. Shrike swingin' swords, Agent Summers slingin' fire... Walker and the doctors... and us three paranatural punks bringin' up the rear..." His gaze was fixed far off across the lake, out towards better times and the waning Mayview sunset.

Spender ran a hand through his hair, which was still damp from his swim. "I don't remember facing much of what we faced at that age as a 'team.' They were certainly all in town at the time, I'll give you that." He'd made his interjection with a smile, but his voice held just the slightest edge of old frustrations.

"Sorry, sorry—full credit to the savior of Mayview for blasting that big whatever-it-was to bits all by yourself." Jean leaned back on his log perch, shooting Spender a teasing wink. "And to Mina, lest we forget, for beating up an old lady."

Mina sputtered out a garbled sound of unrefined offense. "The Witch wasn't just a–" A fist shook in Jean's direction. "I beat up fear itself!"

Spender looked away from the somewhat playful Jean vs. Mina brawl that was unfolding at the fireside. Isabel was staring up at him, seemingly equal parts shyness, curiosity and awe.